What is the best time of year to trim your trees? 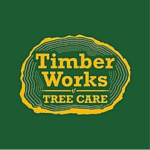 Does it really matter when you do it, as long as they are trimmed when necessary? Is there really a best time of year to trim trees?

The answer, really, is that it depends on the type of tree or bush you are trimming, as well as on what you are trying to accomplish by trimming.

What is the best time of year to trim trees or shrubs? 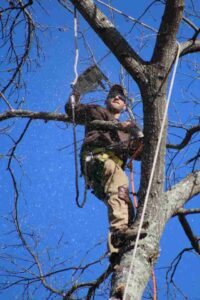 Generally, the best time of year to trim trees and shrubs is late winter; after the coldest freeze of the season has passed, but before the spring thaw.

This is especially true for heavy trimming jobs, where a lot of the crown has to be removed, and for trees like pines, which tend to “bleed” (release a lot of sap).

Trimming at this time of year will prevent as much “bleeding” as possible, and will also result in much more vigorous and energetic growth once the tree blossoms in springtime. There may be minimal “bleeding” come spring time, but this will pass and will not have much of a detrimental effect on the health of the tree.

Some trees and bushes, however, are best trimmed at other times of year. On some deciduous trees and shrubs, a light trimming in the summer is completely acceptable; for spring flowering shrubs, such as the forsythia or the lilac, it is best to prune about two weeks after the new spring growth—this will encourage flowering and growth.

Pruning on old growth, before the plant blossoms for the season, may drastically reduce the amount of growth and foliage that season.

It is thus best to wait until after the plant has stopped flowering for the year, and then make any necessary cuts.

Trimming Trees in the Fall 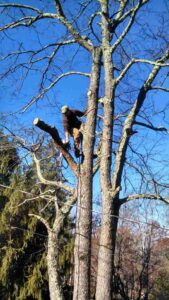 It is always best to avoid trimming or pruning your trees in the fall. Fungi spreads most rapidly in fall weather, and can infect and damage trees where trimming has occurred.

Even trimming too late in the summer, especially in harsher climates with more extreme climates, may encourage later summer growth that may not fully heal and before fall comes and winter settles in; this can be more harmful to the health of the tree and leave it open to disease and decay.

Trimming causes sap to rise into the branches of the plant; plummeting temperatures shortly afterward could greatly harm the tree. Definitely do not do any pruning when it is wet outside; this is an invitation for fungi and mold to grow, and for disease to spread.

When Is The Best Time To Trim Evergreens Or Coniferous Trees?

Evergreen trees, such as pine, spruce and boxwood, do not shed their needles in the fall – hence the name “evergreen”.

They do, however, enter an almost dormant state in the winter – they should thus be trimmed as you would deciduous trees; in late winter, before dormancy ends, or sometimes in the summer, as necessary. This is especially true for broad-leaved evergreens, such as the ones mentioned above.

Take care to only prune or trim evergreens when they are young, to direct and shape their basic growth. As they mature, it is best to leave them alone.

Can you trim or remove a tree in the Spring?

The answer to this question can be tricky; it depends. 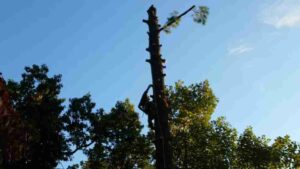 Trimming in the spring, after the sap has begun to run and the tree has blossomed, is generally not a good idea. There are, however, some particular circumstances where it is completely acceptable and even a good idea.

Removing dead or damaged branches, as well as those that are infected or diseased, is always advised, no matter the time of year. This is to prevent any them from damaging the rest of the tree, or from falling and posing a safety hazard to passerby’s and nearby structures.

Remove branches that are growing across or rubbing against each other; this will keep them growing into each other at unnatural angles, and from breaking each other and becoming a safety risk.

Is it a good idea to Trim Trees in the Summer? 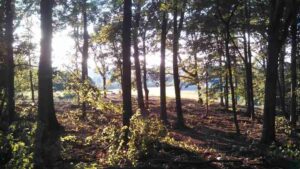 Light trimming in the summer, to help retain shape and form to the tree and improve its appearance, is also acceptable and most likely not harmful.

It is often much easier to see the shape and aesthetic of a tree’s crown when the tree has fully bloomed in the summer and all its leaves are out; in this case, trimming a few branches here and there to clean up its appearance or shape a bit is perfectly fine.

This will also help direct the growth of the crown, giving it a much more pleasing appearance, and help it look its best for years to come. Take care, however, to avoid removing too much of the crown, so as not to damage it or give it an unnatural and unpleasing shape.

Always leave any intricate or elaborate designs to a professional arborist!

Thinning a very thick and overgrown canopy in the summertime can also help sunlight, air and nutrients reach more effectively into the crown of the tree, improving circulation and overall health, preventing disease and further decay.

Thinning late in the summertime, after most of the growth has passed, can also be more advantageous, as it may be too late in the year to stimulate new growth – which helps keep the foliage thin and manageable.

Of course, when to trim is not the only thing you need to know about trimming or pruning your trees and shrubs. It’s also important to know how to cut them. For more tips, read our tips for tree trimming and pruning.

And remember, when you aren’t sure whether or not you should trim a tree, or exactly what needs to be done to it, it’s always best to contact a professional arborist or tree professional.